About Us:
The VEA Martial Arts Academy is a martial arts school that teaches Kenpo Karate and a highly effective form of Filipino based Martial Arts (FMA) known as Tenio's DeCuerdas Eskrima. The VEA Martial Arts Academy was created as a joint venture between the director of the Victorious Elite Allstars (Amy Acaya), Kenpo Instructor Larry Acaya & DeCuerdas Eskrima Instructor Mike Cardenas. Our goals are to provide practical and quality instruction at reasonable rates to our students and to expose them to other martial arts disciplines through collaborative martial art workshops. If you ever wanted to earn a belt in one system while at the same time cross train in many other martial art systems then the VEA Martial Arts Academy may be the home you have been looking for. However, be aware that class instruction is rigorous and we always demand 100% effort from every student. The adult eskrima class does not train for sport, we train for practical application of techniques for our own survival or for protecting our loved ones.

Providing quality instruction in Kenpo Karate and DeCuerdas Eskrima while giving students the knowledge and skills to defend themselves with or without the use of weapons.

Black Wolf DENS:
Black Wolf Dens are affiliate schools operated and overseen by 2nd degree Black Belts or higher of Maestro Mike Cardenas. DEN-1, the original school, is located in Manteca CA at the VEA Martial Arts Academy. Affiliate DENS follow original DeCuerdas curriculum for belt ranking of their students but may supplement their program with additional ideas or concepts spawned from their DeCuerdas background and or from other systems. DEN Leaders are also proficient in the certification material (levels 1-3) that has been developed for affiliate packs.

Black Wolf PACKS:
Packs are existing martial art schools of a different system and or style (e.g. Karate, Kenpo, Taekwondo, Jiujitsu, etc..) who are wishing to learn foundational aspects of the Filipino Based Martial Art of DeCuerdas. Foundational material is covered in 4 levels of certifications which was developed by Maestro Mike Cardenas for the purpose of propagating the art of DeCuerdas and to share its unique principles and concepts with other martial artists.  Each affiliate pack will be mentored and coached throughout the certification process as well as tested for promotion from each level. Certificates of completion will be awarded to affiliate pack members as they progress through the certification level. Packs are highly encouraged to attend the affiliate rendezvous training camp that will occur at a minimum of once per year at DEN-1 or other Black Wolf DENS for review and training of advanced level-4 material as well as material from levels 1-3. 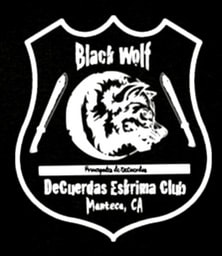 The VEA Academy is passionate about developing leaders of our youth, especially those who may be considered disenfranchised. We recognize the fact that many of today’s children do not have the support systems in the form of youth programs that they once had. We are committed to helping at risk youths develop a positive sense of self and in becoming productive members of society through leadership development, nutrition and physical fitness via the practice of martial arts.

The VEA Academy wants to empower those who are victims of violent crimes, especially women, to regain confidence and positivity through strength, discipline and espirit de corps.The VEA Martial Arts Academy will also empower participants through intense physical fitness and healthy eating habits.

Self Defense Workshop:
The VEA Martial Arts Academy offers 3 developed Self Defense workshops ranging from a fundamental workshop, intermediate and an advanced workshop. We can also customize a self defense program to meet your needs or the needs of your organization.

Amy Acaya is the current owner and head coach for VEA.  The VEA Martial Arts Program is a newly added component at the VEA Academy.

During her childhood she was involved in many sports, gymnastics and dance.  It wasn't until she was 14 years old that she found her true passion in cheerleading.  Amy cheered on her high school competitive team for three years and was also on the school's dance team.  During those years Amy had the opportunity to perform at the Women's World Cup Finals with Jennifer Lopez and in the halftime show at the Citrus Bowl in Florida.  Immediately following her graduation from high school, she began coaching for East Union HS Cheer Team and instructed the freshmen through varsity levels for 3 years.  Amy got her first taste of allstar competitive cheerleading by coaching for Cheer Odyssey for 2 years.  She loved the fast paced routines and level of difficulty that allstar cheer had compared to high school cheer.  In 2004, Amy, along with a group of ladies, founded Victorious Elite Allstars.

It has been 5 years since VEA first opened its doors and Amy says," There have been more long practices than I can count and even more proud moments, we've experienced defeat and triumph, frustrations and excitement, shock and surprise, we've said goodbye to many cheerleaders and have welcomed even more to the gym, I have coached some of the same kids for over five years and have been honored to see them grow into young men and women.  Everything has been a learning experience and I have some of the best memories of my life, so far.  I love all of my families, coaches and staff at VEA and I wouldn't change a thing!"

Victorious Elite Allstars was founded in 2004 by Vicki Crawford, Erica Acaya and Amy Acaya with the goal of enriching the lives of children and their families through the sport of competitive cheerleading.  In VEA's first season, practice was held in Manteca High School's wrestling room.  Despite our humble beginnings, VEA took home ten 1st places, eight 2nd places and three 3rd places, including four National titles!!  Under the current leadership of co-owners Amy Acaya and Erica Acaya, VEA has continued to grow.  VEA now has a practice facility with over 4,000 square feet, spring floors, a tumble track and training equipment.  With a highly trained, professional team of cheer, tumbling and dance instructors, VEA will maintain it's distinguished reputation in the competitive cheerleading world and carry on with years of success.

Our mission is to serve youth and families by providing a safe and positive environment for individuals to maximize their potential both personally and as team members.  Our goal is to mentor our athletes by teaching them the importance and value of respect, character, commitment, dedication, integrity, positive attitude, hard work and leadership.  Along with promoting valuable life skills, we strongly emphasize good health and physical fitness.

o    We will make the safety of the young people entrusted to us our number one priority.

o    We will measure our success primarily by contributing to the positive development of young people and secondarily by competitive success.

o    We will focus on serving athletes of all ages and abilities and their families.

o    We will utilize sound business practices in order to generate adequate results, which will allow the business to sustain itself.

o    We strongly believe that family, religion and school are top priority for every athlete.